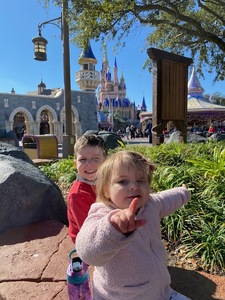 Kinsey and Jordan took their kids to Disney World recently and had a great time. Four-year-old Owen will probably remember more, but it seemed two-year-old Keightley was the one most excited about going. “We going to Disney World… and see Donald Duck, Mickey Mouse, and Minnie Mouse…” was her constant statement of anticipation. 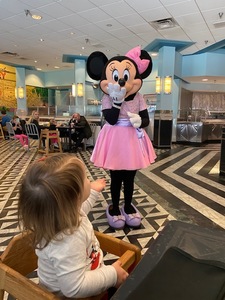 On the second day, when they first saw Donald Duck, Keightley yelled, “Hey Donald Duck! We come to Disney World to see you guys!!” Later in the week Kinsey sent a video of the family eating dinner with Mickey Mouse visiting a table nearby. With a surprisingly loud voice, our little granddaughter shouted, “Look at me! Look at me!” The expression on her face as Mickey walked to the Stanley table was priceless.

So what can we learn from the little ones who exhibit such wonder? “Our citizenship is in heaven. And we eagerly await a Savior from there, the Lord Jesus Christ…” (Philippians 3:20) “Though you have not seen Him, you love Him…” (I Peter 1:8) Does my anticipation to meet the One who died for me approach the excitement of a two-year-old seeking an imaginary character?

Keith Green sang: “O Lord, please light the fire that once burnt bright and clear. Replace the lamp of my first love that burns with holy fear…” If my longing is absent, if my passions are elsewhere, if pleasures or wealth or worries or trappings of the world have crowded out the Lord, I must run to Him. He is merciful and quick to restore… but I must let Him occupy the throne of my heart — His rightful place.

The second thing I admired in Keightley was her shameless audacity to call out to the one she came to see. “Look at me! Look at me!” The little girl intended to cry out until she was acknowledged. The Father wants us to be just as bold.

Except… that is why He came. Mickey Mouse was in the restaurant to bring joy to little boys and girls. Jesus Christ came to earth to heal the sick, to give sight to the blind, to set the captives free, and to seek and save the lost. The person who ‘sees’ Jesus for who He is and seeks after Him with reckless abandon brings much joy to the Father’s heart.

“Jesus stopped and ordered the man to be brought to Him. When he came near, Jesus asked him, ‘What do you want Me to do for you?’ ‘Lord, I want to see.’ Jesus said to him, ‘Receive your sight; your faith has healed you.’ Immediately he received his sight and followed Jesus praising God. When all the people saw it, they also praised God.” (Luke 18:39-43)

The Lord wants His children to long for His coming. Jesus wants us to seek Him with all our hearts. At the close of the parable of the persistent widow, teaching His disciples to pray and not give up, Jesus asked: “When the Son of Man comes, will He find faith on the earth?” (see Luke 18:1-8) Let’s be childlike.

“Truly I tell you, anyone who will not receive the kingdom of God like a little child will never enter it.” Luke 18:17