Susan and I were planning to visit young friends in Minsk, Belarus via Krakow, Poland this past July. Slava and Alina have visited our home several times. Slava wrote this last week:

Our country got into a political crisis that led to an economical downfall. After unfair elections and cruel treatment of peaceful protesters, which included torture and severe beatings of the arrested (about 7000 people), 6 people died. Some of them were killed by bullets and some of them were tortured to death. Nowadays, it is not safe to live in our country. OMON (the special forces) were arresting people on the way home or to a store. Doctors were horrified seeing the victims of these arrests and their condition upon their arrival to the hospital. We could see a lot of this action taking place outside of our windows. After the riots I was a volunteer next to the prison in Okrestino where the arrested were released and I could talk to them. All of them shared horrific stories of what happened to people in that place. A lot of them were standing there to get their belongings that had been taken from them. Almost all of them had bruises and signs of beatings on their bodies. Quite a few of these people could not find their things and valuables. A lot of people are planning to leave the country.

Because of all these problems we completely forgot about COVID-19, it is definitely not a primary concern for our country right now.

This situation in our country is a great challenge for churches and ministers. Church leaders are being threatened not just generally by the president but by personal phone calls or emails as well.

We are trying to figure out how to share God’s Good News with people and be the light in this darkness. In spite of all these difficulties our nation has come together, and people are helping and caring for one another. We continue our Sunday meetings, participate in volunteer work, and just take care of each other and our unbelieving friends.

Please pray for the presidential power to be given to its rightful owner, for the end of violence and repressions.

Pray for our church to be able to use this opportunity to share Jesus, to encourage and comfort those who suffered psychological and physical trauma.

We are very thankful that you are thinking and praying for us, helping us in our need.

September 1 was the day in 1939 when Hitler revealed his true intentions and invaded Poland. British Prime Minister Neville Chamberlain’s “peace for our time” was not to be, as the world was soon swallowed in war. The Jews of Poland were the ‘firstfruits’ of Nazi evil. Anyone who doubts the reality of the relationship between spiritual and physical war should simply read history. 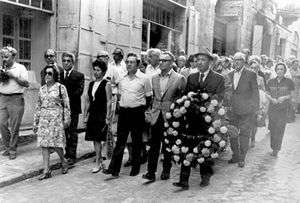 Steven Spielberg won seven Academy Awards for his 1993 movie: ‘Schindler’s List’. I read the book this past summer and wrote the following:

Tel Aviv first honored Oskar Schindler on his fifty-third birthday in 1961 with a plaque in its Park of Heroes. Shortly after, in Jerusalem, he was honored as a ‘Righteous Person’ — a Gentile that God had chosen to help His people, the Jews.

By most people’s standards, Oskar would not be considered righteous… and he surely would not have described himself in such a way. He drank a lot, lied a lot, and carried the reputation of being a womanizer. So what led to his heroic behavior?

Australian novelist Thomas Keneally published a book in 1982 that described an Austrian-born, adventurous young man who launched a profitable business in Krakow, Poland at the beginning of World War II. His mother was a strong Catholic, but Oskar followed in his father’s footsteps… he was not faithful to the Church or his wife. Growing up, the Schindlers had Jewish friends in their neighborhood, but no friendship seemed to point to the extraordinary path Oskar would take after realizing Hitler’s intent to persecute and exterminate all Jews in Europe.

In 1941, all Schlender’s Jewish workers were moved to the Krakow Ghetto. As the Ghetto was being depopulated before March of 1943, they were all moved to the nearby Plaszow labor camp. Hearing of the living conditions and atrocities of Plaszow, Oskar built barracks in his factory and arranged for all his workers to be residents of his ‘camp.’ Such decisions eventually raised suspicions. Over the course of the war, Schindler was arrested by Reich officials three times. A smooth talker, the business man always justified his actions as ‘essential’ to keeping skilled workers healthy and the production of critical supplies moving.

But talk alone would have never have resulted in nearly twelve hundred saved lives. Oskar was famous for hosting extravagant parties. Decision makers, Nazi officers, city officials, and others were wined, dined, and bribed to look the other way or simply forget their host’s missteps. These people of influence, who considered themselves friends of a generous business man, would often be instrumental in rescuing Oskar and allowing him to carry on.

Throughout the war, cigarettes, fine wines, scotch, vodka, diamonds, and loads of cash were exchanged for lives. Towards the close of 1944, as concentration camps were liquidating and eliminating evidence of evil, the famous ‘list’ was created to shift Schindler’s business location out of Krakow to Brinnitz, Czechoslovakia. The chosen six hundred men and three hundred women boarded separate trains in October for a several-day journey in freezing weather to work for Herr Direktor Schindler in another camp.

Tragically, the women were first taken to Auschwitz — a destination of no return. Having just spent eight days in prison after his latest arrest, Oskar scrambled to undo the transportation error. He exerted all energy and influence to save his women workers from certain death. He basically purchased them with his own money. Never had a group of prisoners been rescued from the infamous Auschwitz. When they arrived at Brinnitz in November, sick and emaciated, Oskar simply said: “You have nothing more to worry about. You’re with me now.” (p 330)

In danger of being killed by the invading Russian army, or captured and accused of war crimes by the Americans, Oskar and his wife Emilie left Brinnitz five minutes after midnight on the last day of the war. Before departing, he said to his workers: “Don’t thank me for your survival. Thank your people who worked day and night to save you from extermination… Don’t go into the neighboring houses to rob and plunder. Prove yourselves worthy of the millions of victims among you and refrain from any individual acts of revenge or terror.” (p 371)

The newly freed prisoners gave him a letter written in Hebrew that chronicled Schindler’s role in their salvation. They also presented Oskar with a Hebrew-inscribed gold ring with a saying from the Talmud: “He who saves one life, saves the world entire.” The precious metal was donated by Mr. Jareth, who volunteered the removal of a gold dental bridge from his mouth so it could be melted down and re-formed. (p 368)

The Schindlers had no money or influence after the war. Oskar had given everything to rescue the targets of the Holocaust. He was sometimes spit upon and otherwise mistreated in Germany for being a ‘Jew lover’. He and Emilie moved to Argentina where he farmed ten years before going bankrupt. He moved back to Frankfurt, but Emilie stayed in Argentina. Eventually, many of the ‘Schindler Jews’ who settled in Israel invited Oskar to visit. There he was honored as a hero. He died in Frankfurt in 1974. Keneally’s book closes this way:

“The Franciscan parish priest of Jerusalem had given his permission for Herr Oskar Schindler, one of the Church’s least observant sons, to be buried in the Latin Cemetery of Jerusalem… Oskar’s body was carried in a leaden casket through the crammed streets of the Old City of Jerusalem to the Catholic Cemetery, which looks over the Valley of Hinnom, called Gehenna in the New Testament. In the press photograph of the procession can be seen – amid a stream of other Schindler Jews – Itzhak Stern, Moshe Bejski, Helen Hirsch, Jakob Sternberg, Juda Dresner. He was mourned on every continent.” (p 397)

What causes a man to forfeit his freedom, expend all his possessions, and risk his life for foreign outcasts? “Lord, teach me…”

“For the people of this world are more shrewd in dealing with their own than are the people of the light. I tell you, use worldly wealth to gain friends for yourselves, so that when it is gone, you will be welcomed into eternal dwellings.” Luke 16:8-9

This entry was posted in history. Bookmark the permalink.