“As soon as the people saw Jesus, they were overwhelmed with wonder and ran to greet Him.” Mark 9:15

A group of sixteen of us traveled to Ecuador this past June to work with Pastor Manuel and his family in the mountains and valleys of the Andes. Each day construction work and community service took place, with each of us enjoying the fellowship of our humble, hard-working brothers and sisters. 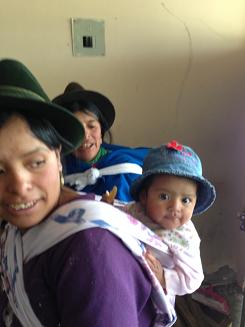 On our last full day in the country, we were happy to accept the invitation of the only Christian family who lived in a small village called Providencia. This family wanted all the children of the community to hear the story of Jesus, so we were able to bring a simple meal, some arts and crafts, and the Gospel.

The meeting room barely held the sixteen Americans, about fifty children, a dozen or so mothers, and two grandpas. After singing a few songs, I was asked to speak. Being a teacher, I can usually target students that can potentially sabotage the best of lessons; two thirteen-year-old boys were my top candidates. When one returned my wink during the singing, I at least thought they would give the foreigners a chance.

I shared about the God who created all the beauty of their land and the Father who loved each one of us more than we can imagine. As our leader Melaney interpreted, it was remarkable to watch every single person focus on the message. At the close, I told them I wanted to tell a story about Jesus and asked if a few of the children would help act it out.

Three girls and three boys raised their hands, including one of the thirteen-year-olds who had earlier caught my eye. We had two college-age kids in our group named Andrew and James; I let our John be the apostle that Jesus loved; and I changed the name of my good friend Mark to Peter as he had the best beard among us.

I asked everyone to pretend that I was Jesus, who often visited villages just like theirs. I shared that one day several children wanted to meet Jesus, so I asked my six volunteers to stand at the end of the room opposite me. But for some reason, some of Jesus’ closest followers thought Jesus was too busy and too important to greet the children. As Andrew, James, John the Beloved, and bushy-bearded Peter stood with arms folded across their chest preventing the children from coming to my side of the room, the crowd seemed quite distraught.

I don’t think Jesus ever wore a baseball cap, but I became so aggravated with my apostles that I took off my cap and hit each of them on the head. “What are you doing?” I cried. “Let the children come to me and do not hinder them! Don’t you know the kingdom belongs to ones like these?” Big smiles broke out among all in the house as the kids made it through the barrier and everyone realized that Jesus wants to be a Friend to all. Jesus brings Good News!

“And they were bringing children to Him that He might touch them, and the disciples rebuked them. But when Jesus saw it, He was indignant and said to them, ‘Let the children come to Me; do not hinder them, for to such belongs the kingdom of God. Truly I say to you, whoever does not receive the kingdom of God like a child shall not enter it.’ And He took them in His arms and blessed them, laying His hands on them.” Mark 10:13-16

This entry was posted in missions. Bookmark the permalink.